How Iceland Drilled For Renewable Energy And Struck Tourists 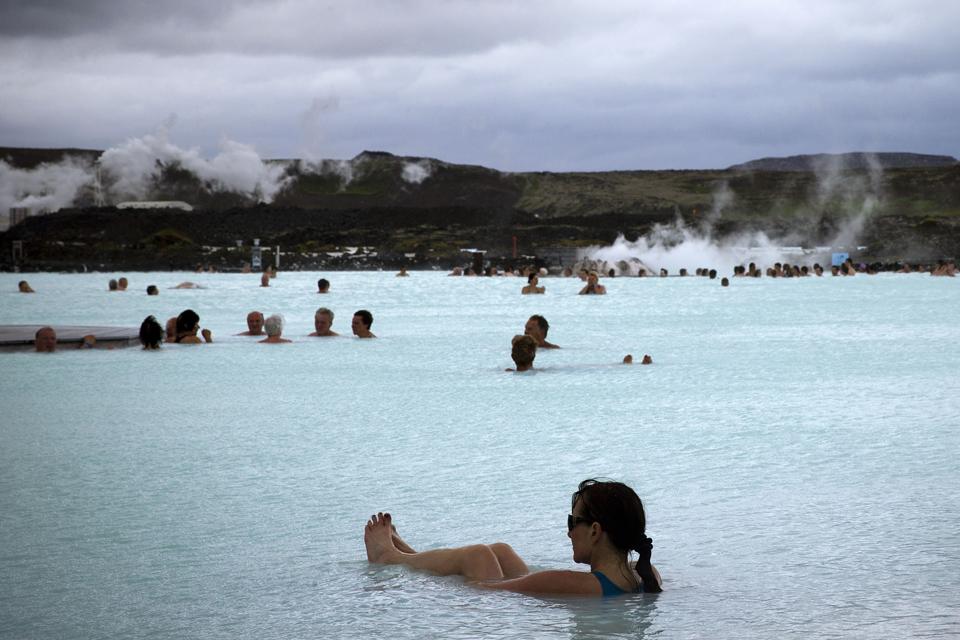 People bathe in the ‘Blue lagoon ‘ geothermal spa, one of the most visited attractions in Iceland in the Reykjanes peninsula, southwestern Iceland. (JOEL SAGET/AFP/Getty Images)

“For most people a clean energy economy or a clean energy society is a concept, it’s a mission, it’s not part of their practical everyday experience,” Grímsson said last month at the Sustainable Innovation Forum, a side event to the Paris Climate Conference.

“That is why for example this power station in Iceland receives every year about 20 percent of all the tourists who come to Iceland, who pay an entry fee to see a power plant.”

Iceland weaned itself from a dependence on imported coal and oil over a 30-year period beginning in 1970. It now derives all of its energy for electricity and home heating from geothermal and hydroelectric power plants.

Iceland’s engineers have begun to design power plants to accommodate tourists, Grimsson said, who come to see what a clean-energy economy looks like.

Many of those tourists also visit the Blue Lagoon, Iceland’s most popular tourist attraction, which draws a crowd of tourists each year roughly equal to Iceland’s population—300,000. In 2012, National Geographic featured the Blue Lagoon as one of the 25 wonders of the world.

Or they visit Iceland’s geothermal-powered greenhouses, where farmers produce tomatoes, cucumbers, and other crops that once had to be imported.

“Another lesson from our journey is that the renewable energy transformation gradually creates what I have come to call a clean energy economy,” Grimsson said. ”It opens up a multitude of new dynamic business opportunities even in areas where most people would have thought an energy transformation had nothing to do with it.”

“Just think of the electric car, which uses that metal, and how much more environmentally friendly the car is the moment it is started for the first time if the material comes from this process.”

Grimsson credits the aluminum smelters with helping Iceland recover from its devastating economic collapse in 2008, but not all Icelanders agree. The smelters stayed in business even as Iceland’s banks failed, they weathered the recession and according to Grimsson they contributed to the recovery. Rio Tinto expanded its smelter in 2010 after signing a long-term energy agreement with Iceland’s state-owned utility.

“Although Rio Tinto terminated all global investment for two years after the fall of Lehman Brothers, the first investment they made was to modernize their plant in iceland for half a billion U.S. dollars,” Grimsson said. “That was in 2010, when most of Europe still thought we were a failed economic state.”

Iceland taps subterranean water heated up to 200º by hot bedrock to power the turbines that produce its electricity, then transfers what would ordinarily be waste heat to a fresh-water home heating system. In some areas, where the water is cooler, it can be used directly for home heating systems.

Read the rest at Forbes.com